When Is It Time to Give Up on a Salesperson? 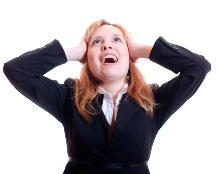 This is an interesting question, both because there isn’t any single right answer, and because it’s one you only ever find yourself asking when things aren’t going the way you hoped they would.

Bringing on a new salesperson involves big costs, both in time and money. So it’s hard to even think about letting it all go to waste… much less starting again with someone new.

Still, there definitely comes a time when you have to cut ties and start fresh. As hard as it might be, financially and emotionally, there is definitely a “throwing good money after bad” situation that can easily take root if you’re afraid to make the tough personnel calls when they’re needed.

Here’s how to know when it’s time to give up on a salesperson.

When their performance has been poor – or getting worse – for at least six months… and maybe longer. You’ll notice that I said performance, and not necessarily results. There are a lot of factors that go into completed sales, including the economy, competition, and normal business cycles. As an owner or manager, it’s up to you to track progress through all parts of the sales cycle and figure out what’s really going on. The last thing you want to do is fire a salesperson who is on the verge of making a breakthrough.

After you have set the right expectations and created accountability. Strange as it may seem, I sometimes work with employers who want to see results that they’ve never actually expressed. Before you let a salesperson go, make it clear exactly what you’d like to see them doing, in terms of prospecting, meetings conducted, proposals, and closed orders. Better yet, talk to them about the kinds of goals you think are reasonable and get their input; you’ll end up with targets that you both agree are achievable.

When you lay down expectations clearly, and let your salesperson know they’re responsible for meeting them, one of two surprising things might happen. Either they may increase their activity and productivity to meet the goals, or you might discover a relatively simple problem you can solve together.

Again, you’ve invested a lot of time and money in this sales rep. Don’t throw it away if it’s simply a matter of getting them to qualify potential clients more quickly, increase the size of their average order, improve their closing ability, etc.

And on the other hand, if they still show no signs of improvement, at least you’ve made the expectations clear and documented the results. Which leads us to…

After you have covered your bases, legally and otherwise. It’s an unfortunate fact that we live in a very litigious society. Letting people go can be a dangerous proposition for small businesses, even if it’s for performance-related causes. For that reason, it’s a good idea to consult with a lawyer and at least know your basic responsibilities before you fire a member of your sales staff. You’ll also want to think ahead to potential difficulties you might have in terms of client relationships, prospective accounts, or even having your departing salesperson go to a close competitor. This is definitely an area where an ounce of prevention is worth a pound of cure.

And finally, when you have faith in your hiring ability. Let’s face it: it doesn’t make much sense to let one of your sales people go if you’re only going to end up with another underachiever in their place. So, you need to critically assess your own performance as a recruiter and manager, to spot your weaknesses and not make the same mistakes in the future. It’s true, some employees just aren’t going to work out; it’s notoriously difficult to hire quality sales producers. But by focusing on your own actions and responsibilities, you can greatly increase the odds of finding and developing a winner next time.

It’s never easy to let go of an employee, and especially a salesperson that you have high hopes for. But, if you can follow these tips and recognize when the time has come, you can make the right decision for your company and enhance your sales team going forward.

We use cookies to enhance site navigation, analyze site usage, and assist in our marketing efforts. Read about how we use cookies and how you can control them by visiting our Cookie Policy Page. If you continue to use this site, you consent to our use of cookies. Read moreOkNo