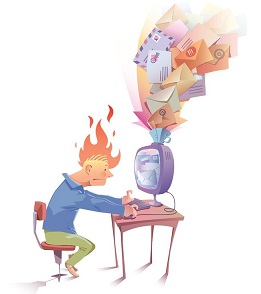 Let’s face it – on a daily basis, we’re all overwhelmed by email, and in the age of email lists and automated marketing campaigns it’s only escalating. So, it’s natural that we might occasionally become frustrated by emails that seem poorly targeted, robotic, or not at all aligned with our interests.

In those moments of frustration, however, the smart thing to do is to take a breath and simply click “delete.” Maybe “unsubscribe.”  What we shouldn’t do is click “reply” and send a snarky response that looks like these two messages a client of ours recently received:

“Stop sending me email templates. I have marketing automation, so I know how this works and I do the marketing for my company, so please remove me from this follow up sequence.”

“Take me off your list. I never signed up. Where did you get my name? I don’t want your crap.”

Now, for some context: The first reply was a response to a nurturing campaign that the client’s marketing team had sent. The second was a response to a prospecting inquiry from a salesperson. Both outbound emails were professional and well-written, and they weren’t pushy. Yet, these people found it necessary to send scathing, off-the-cuff responses.

Why should you care about those two scenarios?

Consider this: If you’re the one who sent those snarky responses, how would feel if the person you sent them to passed them on to their company’s president? And what if the president vowed to never work with you because of your lack of tact?

But it doesn’t end there. Let’s say the president then forwarded your message on to his executive team and they responded with equal disdain. Next, maybe the president shared the message with his network – a group of equally influential executives, business leaders, and decision-makers – and they weren’t big fans of your communication style, either.

You get the idea.

The bottom line is that just one pithy, scathing, off-the-cuff email can have huge ramifications. While some businesses mindlessly send email campaigns from “noreply” addresses or unattended accounts, the most sophisticated and successful companies actually hire staff to monitor and read every response.

When that’s the case, a polite request to be removed from an email list or be given more information on why you were targeted will likely be met with an equally courteous response.

On the flip side, when you send an unnecessarily scathing response, your message will likely end up in more than just the inbox of the person you replied to. Disgruntled contacts’ email responses to those same sophisticated companies are escalated to avoid bad will. But while companies are working to avoid the email complaint from possibly going viral, they may also be blacklisting the person (and the company) who sent it.

So, the next time you feel tempted to send a scathing response to an email campaign, resist that urge. Doing so could save you from some consequences that you may not have considered.